END_OF_DOCUMENT_TOKEN_TO_BE_REPLACED

I’ve created a page to discuss the talk of “Hate Speech” in Sri Lanka after recent events. Please go to https://lankafuture.wordpress.com/hatespeech to see it, and please read and share.

Please note this is a long article. I urge you to read the whole thing for an actual dissection of the themes, but if you want to get to the analysis and discussion, please click here.

So Thisuri, hello once again. You must be busy these days, as you strive to be able to prefix your name with the title “Dr.” Who did you get that idea from by the way? Was it Dr. Dayan advising you? 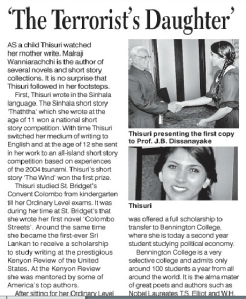 A fictional story by someone without a university degree is “the best post-war novel and a roadmap to reconciliation and manifesto for the government of Sri Lanka” according to Dr. Dayan – high praise indeed. Source.

So as I mentioned in my earlier message to you, my self-anointed task of scraping through the muck that you and your fellow online-yahapalanas produced back during the Rajapaksa period has been quite a revolting experience for me. Not because you were against Rajapaksa per se, but because of all the deliberate lying you did.

END_OF_DOCUMENT_TOKEN_TO_BE_REPLACED

I’m so sorry that the regime you helped bring to power is struggling a lot these days.

Imagine my utter disgust to see, immediately after a humiliating rout at the local government election, just when a no-confidence motion was about to be presented against your boss Ranil, which would have brought down his entire illegitimate regime and your monstrous yahapalanaya, a massive, deadly race riot began, with eerie similarities to the 1983 riots – which also happened the last time the UNP were in charge.

I remember you liked to write sarcastic letters when you want to make political points, so I thought I would try and reach you through your preferred medium. I have to warn you though, I’m not so good at two-faced spleen venting, so it won’t be as undignified as the effluent you put out.

I was reflecting on the people who were around online back in 2015, and thought of finding your blog again to reminisce about those days. What a journey we’ve had since then!

END_OF_DOCUMENT_TOKEN_TO_BE_REPLACED

How those preaching good governance are just shills for a foreign extreme-left neocolonial agenda.

Let me start by asking you some very moderate, reasonable questions.

But when Sri Lankan “moderates” ask these reasonable questions, what they are really asking is this: Isn’t Ranil good? Isn’t Mahinda bad?

END_OF_DOCUMENT_TOKEN_TO_BE_REPLACED

Over the past 8 years, some people have been spreading vitriolic anti-Buddhist and anti-Sinhala messages on social media in a well-organized, systematic campaign to tarnish Sri Lanka. Below is the kind of stuff they write to spread Buddhismphobia and stir racial tensions in the country.

By constantly vilifying and attacking the Sinhala Buddhist civiliazation of Sri Lanka, they are sowing fear in the minds of the minorities and trying to cause Sinhalese themselves to question their history, culture and traditions.

All of this is an attempt to fracture the nation along inter-ethnic lines and cause division within the Sinhala population itself. By doing this, they hope to break down society and then call in foreign help to recreate Sri Lanka based on extreme-left Marxist ideals in which the majority are constitutionally suppressed, and so that the whole country functions as a foreign-controlled dominion.

Here is a response I received almost instantaneously. 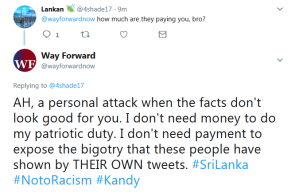 There’s much more below.

END_OF_DOCUMENT_TOKEN_TO_BE_REPLACED

Trying to piece together what the hell just happened in Kandy.

And a chilling announcement exactly one week prior by Rajitha, one of the first coup plotters of 2015:

END_OF_DOCUMENT_TOKEN_TO_BE_REPLACED

It is extremely sad to see the country heading into a disaster yet again under the NGO-backed Ranil and Sirisena regime.

Following on from the earlier #FakeNews attack on Sri Lanka last month, the NGOs are back at it again now. The shady NGOs have reactivated their plan from February 11th 2018, and are yet again trying to interfere with Sri Lankan politics and the Sri Lankan democratic process by connecting Mahinda Rajapaksa and the SLPP with the present failure of law and order in their puppet regime of Ranil and Sirisena.

They are deliberately exploiting the unrest in the country to further their political agenda of preventing the patriotic, development-oriented Mahinda and his SLPP party from returning to power.

They are acting in total desperation since Mahinda’s victory in the Local Government election, and are now clutching at straws trying to prevent his return to power.

They are trying to delay the no confidence vote, prolong their illegitimate government, and possibly postpone the upcoming presidential and general elections.

I have compiled a few more of their suspiciously coordinated tweets here:

Fight against #FakeNews and #බොරුපුවත්.

MISSION
We are not affiliated with, paid by, or related to any Sri Lankan politician, political party, activist group, or entity.

We proudly do our duty to serve the cause of liberty and sovereignty. Our hearts are not for sale.

COPYRIGHT
All writings, images, and other content are copyright to the authors of this blog.

Feel free to use any materials from this blog to further the patriotic cause – but you MUST give credit to this blog and Twitter handle @wayforwardnow.